Big Brother is Watching You 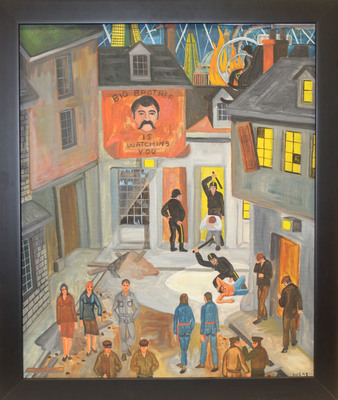 Street scene depicting scene from Orwell's 1984 with searchlights and flames above the buildings. In foreground people walk in the street with expressionless faces. At right one man walks the sidewalk, another leans against the wall with his right hand up to the side of his head. Behind him, at the corner of a street leading off to the right a barechested man lies in the road being beaten by a helmeted, black-uniformed policeman(?), another man on one knee behind is similarly being beaten as a third uniform looks on to the left. 2 TV screens are mounted on walls above doortop level. A poster mounted above a store window reads "Big Brother is Watching You" with a "photo" of a handlebar-mustached man.